Schools can and should be a place for strong community. In good times, this may feel trite or unnecessary. But all the work of building that strong community can become incredibly important in times of tragedy, as Elwood – John H. Glenn High School discovered this past year. In the fall, a football player from a neighboring school died after injuries suffered in a football game at John Glenn. Shortly after that, a John Glenn senior suffered a brain injury during a travel-league baseball tournament in Boston, MA. In January, a member of the Class of 2015 lost his life in a sledding accident. Because this is a school that has strong supports in place, the entire Elwood Community was able to pull together during these tremendous times of sorrow. 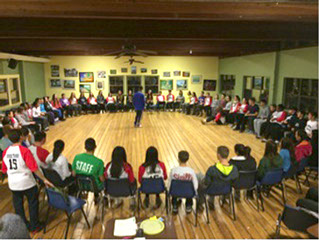 The school was opened with support staff available on the weekends. Parents, along with their kids, were able to take advantage of the professional help. Since January, students have created activities in order to share emotional support while also raising money for scholarships in the name of their lost classmate and for the student from the neighboring school who suffered the fatal injury while playing against Glenn. These activities included an event called Dancing with the Teachers, as well as a Benefit Concert that included musical performances by fellow students and faculty, in addition to a video and a candlelight remembrance.

This high school has long prided itself in providing strong social and emotional support for students while maintaining high expectations for academic achievement. The extensive system of support at the school includes the following: a freshman seminar course as a transition program to positively reinforce academic success for all students; a pupil-personnel support team that meets weekly; purposeful partnerships to promote student social and emotional health and academic achievement with agencies such as Huntington Youth Directives, Huntington Sanctuary, Huntington Drug and Alcohol, Huntington EXCEL program, and other local agencies. The school also has the Natural Helpers program, a peer-support program that is based on the premise that students naturally seek out peers during times of emotional need. Peer helpers in the program promote the norm that it’s okay to seek help; they spread the word that adults are there for you and they care. These and other programs identify the school as one that provides opportunity by giving students the emotional support they need to succeed.

Elwood-John H. Glenn High School Among 17 Schools in Nation to be Named a School of Opportunity

May 20, 2019: "Here are 7 'Schools of Opportunity’ that 'show us a way forward." Read about this year's recipients in The Answer Sheet.